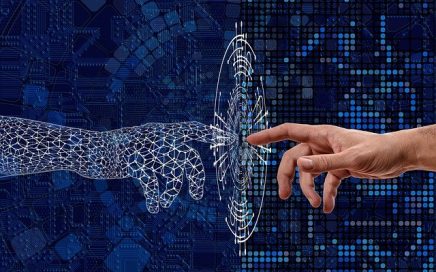 Back in 2015, Yuval Noah Harari wrote in his book titled, Homo Deus. In that book, he mentions by the year 2033 so many things of today will be replaced by computers. Jobs such as truck drivers, pilots, doctors, and even carpenters will be replaced by computers. He believes the only jobs that will be available will be jobs that are computer-related. Ten years ago I would have thought it was impossible, but today I am thinking differently now.

I think of all the products available now that weren’t here a decade ago. Photoshop has replaced the profession of photography with the autocorrect button. Tesla cars have replaced curse controls with a self-driving auto mode button. And space travel is no longer for trained NASA astronauts but for civilians. It definitely seems like computers are taking over our jobs.

It’s not all terrible news. Especially when it comes to small businesses. No longer are the days when we need an actual building or store. We just need a webpage. What about having employees and a factory? Nope, all that’s needed is a CNC machine or 3D printer. What about having a warehouse and delivery drivers? One word. Amazon.

I have to say, even in my shop, computers are finding their place there. I do sometimes use a computer CAD program for my furniture design. I have a small CNC machine that will one day do all my carving. Instead of buying carving chisels, I’ll be buying router bits.

When I watch a CNC machine I am amazed. It is so fast and accurate. It never needs a break. It doesn’t get hungry. It can work in the dark. It can go 24 hours a day and have no need to rest. It is way more efficient than myself.

In addition to working better than me, computers learn faster than me. I try to read every day so I can hopefully learn something new. But a computer is learning all the time. I heard it said that a computer doubles its own knowledge every two years! I am lucky if I can retain what I currently know after two years.

I seem to believe that a computer will never be able to convey feelings and it won’t be able to put passion into something. I would like to think that my furniture expresses my true love for this craft. But an experiment was done where a computer wrote and composed music against two world-renowned composers. When the music was played to an audience, the people picked the computer’s song over the other two composers because they thought it had more passion in it. So can a computer develop feelings?

Computers are at the point where they can trick us into what we think we are seeing. The old saying, “Seeing is believing.” may not be true anymore. With virtual reality games, you are transported into another world. They seem so real that it’s almost impossible to believe it’s not. In fact, so many people are enjoying the virtual reality world that companies such as Nike are selling virtual shoes you can buy for your online character. Could this be a new world in the way we do business? Could I now start designing and building furniture and sell it one day to people in their virtual world for their virtual homes?

It’s unclear where computers will take us. If Yuval Noah Harari is right, in 2033 I might have my livelihood replaced by a machine. What will I do to earn an income? It’s unknown at this time. But I know one thing, I will be the last of a generation to say that my job was using my HANDS creating and making furniture for a living. And maybe that will earn me a place in the history books. Well, the digital online version anyways.

The evolution of shop set up part 2

What do you expect?

Tools of the Trade