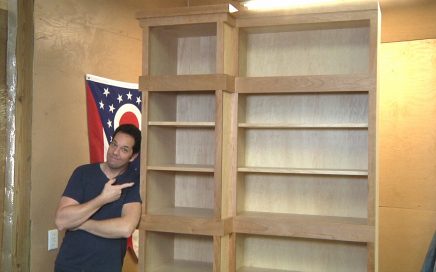 Most woodworkers would love to do my job. Walking out into my shop, turning the lights on, Youtube plays documentaries or blues music, and I start working with wood. And although it sounds like a dream job, it does come with its own fair share of nightmares. Here is one such story.

A relatively new customer came to me asking if I could build a simple closet storage unit. I reassured him that I have done it hundreds of times before and it would be no problem. It seemed as if this was going to be a very easy project. The customer knew exactly the size and look of the project. It was going to be maple plywood with a cherry face frame. It was going to have fixed shelves and adjustable ones. He was even going to supply me with the cherry material. He was so thorough, he knew the exact sanding sealer and topcoat finish he wanted. It just so happened to be CrystaLac products. Ones that I am very familiar with. He clearly knows what he wants and must be a very particular individual. All his preparation just saved me 25% of my time.

I gave him my quote and he was quick to give me the “go ahead”. So in my van, I went off to the supply store. This started off well. I calculated my material cost, with a cushion for minor unforeseen expenses. I calculated my time and felt confident I could finish early, thus earning a little extra green. But just ahead a storm of trouble was brewing and almost from the word, “go” things started to go off track.

I picked up the ¾” plywood for making the carcass of the unit and I managed to cut down the plywood an inch too wide. Normally I wouldn’t say is a problem, but the remaining plywood now left me ½” short for the next piece I needed. Disappointed in myself, I remembered I had factored in a little extra for such a mistake. But now all my cushion money was used up right at the beginning. I took a deep breath, swallowed my pride, and returned to the store.

Back in the shop, taking care to avoid another mistake, I cut the plywood to my cut sheet.

I meticulously measure the holes for the adjustable shelves, making sure nothing will be misaligned. Some assembly follows and attaching the fixed shelves were next.

I decided the fastest way to assemble the unit was the use of pocket screws. I have the Kreg Foreman which makes drilling pocket holes really fast and actuate. But something odd started happening. As the bit started drilling, it would get halfway and stop. It was the craziest thing! After troubleshooting it for 45 minutes, I found a very small crack in an electrical wire that caused and open in the circuit and stop all power to the motor. GRRR!!!! I had to stop, disassemble the machine, rewire it, and put it back together. Total time lost, over two hours.

Finally, I pocket screwed them to the sides, but I made extra sure that the shelves didn’t move while attaching the screws. Once again making sure everything would be level and square.

The customer wanted a ¼’ plywood back. I prefer ½” but I was working from his plans. I figured I would rabbet cut with the router on the carcass and drop the back panel into place. When I turned the unit over, I realized I made a classic rookie mistake. I forgot to cut my shelves ¼” shorter in depth! Now I had two options. I could take the shelves off and cut them down, or rabbet six individual back panels. Since my shelves were glued and screwed in place, I decided to rabbet each back panel. More time wasted.

After cutting all the backs and fitting them into place, I decided to leave them off until after spraying the finish. This will make it easier and a smoother finish by being able to spray from the front and the back. Because of the shape of this unit, it becomes awkward flipping it over. But I need the front-facing upwards so I can start on the face frame. And I now take a look for the first time the cherry wood my customer gave me.

The cherry wood was a big pile, but after sorting threw the mess I realized it was going to be hard to get the long boards that I needed. The wood varied in thickness, was warped, and had checks. I spent half a day trying to cut, join, and plane the wood to the dimensions I needed. In the end, I decided to buy the remaining cherry over at Kencraft. More time and more money lost.

Back home and working on the face frame, I take some measurements off the carcass and noticed it was way out of square. How can this be? Well, with the back panels off, and it resting on top of two sawhorses on top of al floor that is not level, nothing will stay square. I didn’t have clamps long enough to draw it in so I had to resort to another method.

I took some scrap square pieces of plywood and drilled some large holes near the corners. I was then able to place it on the shelf and against the side. Using some clamps to was able to draw it in pretty close to square. But it still wasn’t enough.

Another trick I used was taking a long board and wedging it diagonally between the shelves. This really helped bring the unit back into square. Now I was able to make and attach my face frame. Believing my problems were behind me, it was full steam ahead now. There was nothing to slow me down. Or so it seemed. (click here to see the video)

For the stiles and rails on the face frame, I usually attach them with pocket screws. But this time I decided to use my Festool Domino forming loose tenons, and then I use my biscuit joiner to attach the face frame to the carcass.

As I was cutting the mortice with the domino tool, a large piece of sawdust went into my eye. YES, I was wearing my safety glasses, Sheesh! But the dust ricocheted off my check to the inside of my glasses and then into my eye. A one in a million shot, but I caught it.

Like most people, I tried to blink a lot and lightly rub my eye hoping to have my eye tear up and flush out the sawdust. No luck. In fact, it started to really hurt. I made my way up to my house and held my eye under the faucet to get a lot of water in there. I’m not sure if it came out then or later, but it felt like sand in my eye. The only way it stopped hurting was if I kept pressure on it to prevent me from blinking. I was so frustrated at this point. I didn’t want to waste the afternoon out of the shop because of sawdust! I needed to get this job done so I could get paid! So I wadded up a huge piece of gauze, taped it with pressure over my eye, and went back out to the shop.  Eventually, over the next few days, my eye was feeling better.

I was finally about to complete the job. But in the end, it took me twice as long and cost more than my estimate. This is a huge problem because I budget my living expenses based on my estimates and time to complete jobs. Not only did it cost me money, but the following customer now is going to be behind on schedule unless I work extra overtime.  I was extremely disappointed in myself. But it’s didn’t end all bad.

The customer was very pleased with the project. And after hearing about the problems which caused a delay, (no inconvenience to him) he was impressed I didn’t try to add additional costs onto the job. I stuck to my word. And for that, he has given me four other projects for his house. I guess doing the right thing, and finding ways to solve problems instead of complaining and quitting can yield positive results. I just need to hope the next four projects don’t go like this one or I’m quitting.

The evolution of shop set up part 2

What do you expect?

Tools of the Trade